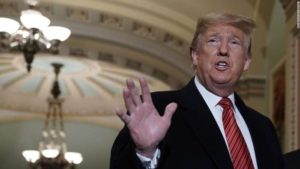 His rationale is to spend $5 billion to build The Wall on our border with Mexico. The president cannot get Congress to approve it. So he has shut down part of the government. Now he’s considering whether to invoke some form of executive authority that a number of constitutional scholars believe is illegal.

OK, then. What happens now?

Congressional Democrats — no surprise there — are sounding the alarm. You can’t do that, Mr. President, they say. We’re going to sue. This is a reach way beyond the presidential grasp, they contend.

Oh, but wait! Congressional Republicans are sounding a note of wariness as well. None other than U.S. Rep. Mac Thornberry, the former chairman of the U.S. House Armed Services Committee — and a committed Republican — says declaring an emergency and deploying military personnel to build The Wall is not in keeping with the Pentagon’s mission.

Other congressional GOP members want the shutdown to end. They want to reopen the government and they want to then resume negotiations to seek a solution to this border security matter.

The U.S. Constitution gives government funding responsibility to Congress. The president does have executive authority, to be sure. However, it remains an open question whether he can re-direct funds appropriated for defense needs to build The Wall that the president believes is a response to threats to our national security.

Except that there is no national threat occurring on our southern border.

Yes, we need to curb illegal immigration. The number of illegal immigrants crossing the border has decreased over many years. The president would have us believe that criminals are “pouring” into the country. They are posing an immediate threat to our national well-being, he says.

It’s a fantasy. Donald Trump is trying to keep a campaign promise he never should have made in the first place, but he did. Now he’s on the hook. He believes he needs to keep it.

I almost forgot! The most significant part of that pledge to build The Wall was that Mexico was going to pay for it. Mexico won’t pay, but Trump then declared in his 10-minute Oval Office talk Tuesday night that a new trade deal with Mexico is going to pay for The Wall. He didn’t say how that would happen. Hey, who needs details?

Donald Trump is flirting with an actual crisis of an entirely different kind if he declares that national emergency.