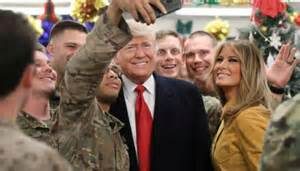 Donald Trump is setting some sort of unofficial record for lying, prevarication, misstatements muttered, uttered and sputtered from the White House.

One of his more recent, um, lies takes the cake.

The commander in chief stood before troops in Iraq the day after Christmas. He went to the war zone with his wife, Melania, and told the men and women assembled before him that they had just gotten the first pay raise in 10 years. Lie!

Then he said he fought for a 10-percent pay increase, even though others wanted to grant them a considerably smaller pay raise. Lie!

Our fighting personnel have gotten raises every year for more than three decades. As for the 10-percent raise this year, it didn’t happen. Their raise is considerably smaller than what the president described to them.

Here is what troubles me greatly: Donald Trump’s incessant barrage of falsehoods seems pointless, needless, foundationless. It is gratuitous. He lies when he doesn’t need to lie.

The Washington Post has been keeping track of the president’s lying/prevarication/misspeaking. The newspaper’s total now is past 7,500 such statements — and this is before the end of the first half of the president’s term! His lying is accelerating as well!

I should be more circumspect in calling these statements outright “lies.” To lie is to say something knowing it is false. Some critics have suggested that Trump simply doesn’t know what he’s talking about; therefore, he doesn’t necessarily purposely lie to our faces.

However, Donald Trump has told us repeatedly that he possesses a level of intelligence that few men have ever had. He knows the “best words.” He went to the “best schools.” He got the “best education.” He surrounds himself with the “best people.” Doesn’t all of that suggest to you — as it does to me — that the president should know of which he speaks when he opens his mouth?

The president is a liar. Now he’s gone before the men and women he purports to “love” and revere — our warriors in harm’s way — and lied to their faces!