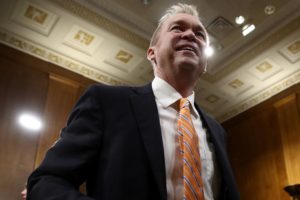 I am going to hand it to Mick Mulvaney, the new “acting” White House chief of staff.

Whereas John Kelly, a retired Marine Corps four-star general, sought to bring a military-style discipline to the White House, Mulvaney isn’t even going to try that approach.

Politico reports that Mulvaney is going to let “Trump be Trump.”

There you go. Let Donald Trump run the White House the way he sees fit and hope against hope that it works out. Spoiler alert: It likely won’t.

However, Mulvaney — who once called Trump a “terrible human being” — will be able to maintain more than a semblance of his own sanity if he allows the president a relatively free rein in the West Wing of the White House.

Politico reports: Mulvaney will adopt a much larger role in politics and messaging, and plans to take a more laissez faire approach to some quirks of the Trump White House that irked Kelly — like non-essential staffers attending meetings, or the president frequently reaching out to longtime friends, Republican lawmakers and advisers for advice or dinners in the White House residence.

Is it a surprise, then, that Trump and Kelly have been barely speaking? Of course not.

I’m not sure what to make of the Mulvaney Doctrine in running the White House staff, except to believe that he’s basically going to cede day-to-day management to the Big Man himself.

I am wondering now whether Mulvaney is going to lobby the president for a permanent appointment in the White House. He now is ostensibly the head of the Office of Management and Budget. I presume he’ll hand OMB duties to someone else while he shows up for work in the White House.

Under normal circumstances, I would wish Mulvaney well as he embarks on a new challenge. These are far from normal times in the White House. The president is feeling the heat of multiple investigations bearing down on him. The White House staff reportedly is down in the dumps over the uncertainty and chaos.

I suppose the best I can hope for is that Mulvaney’s strategy at sanity preservation works for him.