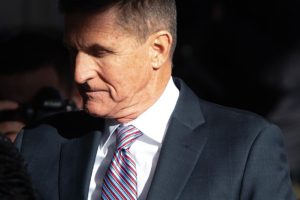 Michael Flynn went before the judge today and got a snootful from the jurist who holds the man’s future in his hands.

The former Donald Trump national security adviser, though, was spared a prison sentence from U.S. District Judge Emmitt Sullivan until after Flynn is finished cooperating with special counsel Robert Mueller’s probe into the alleged Russia collusion matter during the 2016 presidential election.

To be totally candid, I don’t really care whether Flynn serves time in prison for the felony crimes to which he has pleaded guilty. Mueller is asking the judge to spare Flynn prison time because of the extensive cooperation he has given the probe into allegations of collusion, conspiracy and perhaps other matters relating to the Trump campaign — if not the presidency itself.

Sullivan reminded Flynn this morning that he is under no obligation to follow Mueller’s recommendation and scolded the retired Army lieutenant general for being an “unregistered agent” for a foreign power while serving as national security adviser. Sullivan told Flynn that “arguably you sold your country out.” The hearing reportedly was contentious as Sullivan — who was appointed to the federal bench by President Clinton — gave Flynn the holy what-for in connection to his admitted involvement with the Russian government.

Mueller is going to get more information from Flynn as he seeks to conclude his investigation. I hope the end arrives sooner rather than later.

As for Flynn — who once led Republican National Convention cheers to “lock up!” Hillary Clinton for using her personal email server while she was secretary of state — all I want from him at this point is full cooperation with Mueller and his team of legal eagles.

Something tells me Flynn has more beans to spill regarding Trump’s campaign and whether the president himself committed illegal acts on his way to being elected to the nation’s highest office.