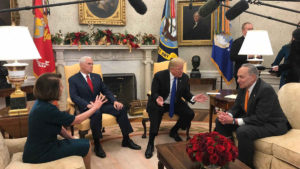 What the president managed to do, though, is box himself into a corner. He did so all by himself. With just a little prompting from Schumer.

Schumer kept resisting any notion that the Senate would vote to give Trump approval for $5 billion to build a wall along our southern border. That prompted Trump to do an amazing thing.

He took ownership of a potential government shutdown if he doesn’t get his way on wall financing. Yep. That’s right. The president of the United States has seized the issue all for himself. He would be glad to shut down the government if Congress refuses to spend the money he wants to build the wall.

Oh, is Mexico going to pay for it? For any portion of the wall. Hah!

Congress and the president have a few days to work out something to keep the government functioning in its entirety.

The meeting at the White House didn’t go well. Trump stormed out, tossing papers. Pelosi and Schumer, meanwhile, have sent a signal that the president is going have to deal with an entirely different Congress — specifically the House — than the government branch that served as his lapdog for the first two years of Trump’s term.

Do you get the feeling that we’re heading for some wild water? We had all better hold on with both hands.