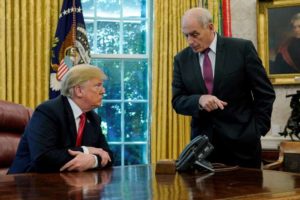 I really and truly wanted John Kelly to succeed as White House chief of staff. I wanted the retired four-star general to bring some of his vaunted Marine Corps order and discipline to a White House that lives, breathes and operates in a chaotic atmosphere.

He didn’t cut it. However, I am not going to heap piles of blame on Kelly. It belongs to the guy who brought him into the White House: Donald John Trump Sr.

Kelly and Trump have all but ended their relationship. They reportedly are not talking to each other. Why do you suppose that’s the case? My guess — and that’s all it can be, for obvious reasons — is that the president no longer wanted to heed Kelly’s wise counsel.

Believe me when I say that I empathize with Kelly if that’s the case. A direct-report position requires constant communication between the boss and those who report directly to him or her. My own career ended not long after my relationship with my boss went from cordial to, well, non-existent.

Kelly replaced Reince Priebus as White House chief of staff. Priebus, the former chairman of the Republican National Committee, couldn’t hit his rear end with both hands. The White House erupted into turf wars, battles among key advisers over who had the president’s ear; they stumbled into each other while entering the Oval Office seemingly all at once to have a word with The Man.

Kelly was brought in ostensibly to bring order to the place.

But as he learned, the way Priebus learned, there’s little if anything to be gained by trying to persuade the president to follow certain steps in order. Donald Trump cannot be reined in. Those who support him cheer him on — and it’s those cheers that Trump hears. He cannot hear anything of substance over the proverbial din.

Kelly supposedly “committed” to staying on the job until the 2020 election. So much for commitment.

I wish the general well, even as I remain a dedicated non-fan of the man who hired him.