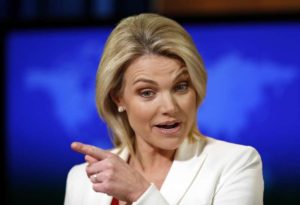 She is Donald J. Trump’s latest incarnation of the “best people” he has vowed to hire to help him “make America great again.”

Oh, but who is she? She is the president’s nominee to be our nation’s ambassador to the United Nations. Nauert will succeed Nikki Haley, who is leaving government at the end of the year, possibly to pursue other political ambitions.

OK, what about her credentials to speak for the United States of America in the body aimed at keeping the worldwide peace and working around the globe?

She has zero foreign policy experience. Nauert has limited government experience of any kind; she joined the Trump administration in April 2017, becoming a spokeswoman for Secretary of State Rex Tillerson, who then slammed the door shut on Nauert. Tillerson managed to get fired and his successor, Mike Pompeo, has welcomed Nauert into State’s inner circle.

But . . . this must be what put Nauert into the hunt for the UN job: She was a top news correspondent for Fox News and served for a time as a co-host on the president’s favorite “news” and gab show, “Fox & Friends.” These are the folks who never ask him tough questions, fearing, I suppose, that they would be lumped in with those other “fake news” outlets. We can’t have it, right, ladies and gents?

So, there you have it. The president of the United States has handed the UN envoy job to someone who has not a single thing to show her fellow diplomats that she knows anything about the world around us. Indeed, she has only a little less government experience than the man who nominated her, Donald Trump.

Hey, she appears to be the perfect pick for the president, who defines “best people” in ways I cannot possibly fathom.