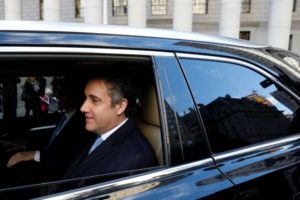 I’m still trying to figure all this out. It’s complicated, folks.

Cohen, the president’s former confidant and lawyer, has pleaded guilty to lying to Congress about Trump’s business dealings with Russia. They appear to be far more extensive than he told Congress. He spent 70 hours talking to special counsel Robert Mueller about all of this.

Trump’s response has bordered on hysterical. He calls Cohen a “weak man” and a liar. He says he was entitled to do business with Russia as a candidate for president, but said he didn’t do it . . . but that he wouldn’t have broken the law had he done so.

Meanwhile, the president is continuing his all-out assault on Mueller and his legal team that is examining alleged “collusion” between the Trump campaign and Russian operatives.

This is getting even messier than before, ladies and gents, if that is at all possible. It’s getting so messy that I am seeing some commentary from longtime Washington journalists and political operatives who suggest that “for the first time” they are wondering whether Trump will finish his term as president.

I won’t go there. I keep thinking about all the times Trump has avoided potentially mortal injury to his candidacy and then his presidency. He has wiggled free, largely owing to the devotion he still commands from his political “base” of voters and his Republican allies in Congress.

I guess we now might see just how devoted they all are if the evidence continues to pile up.

I have this sense that Robert Mueller has compiled a tremendous amount of evidence that is going to make the president’s life extremely uncomfortable.