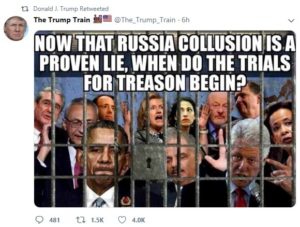 I am running out of ways to express my disgust, disdain and uber-disappointment in the president of the United States.

Donald John “Smart Gut” Trump retweeted this picture that shows some familiar images of men and women behind bars. You have a couple of former presidents, two former attorneys general, two former FBI directors (one of whom is a special counsel examining “The Russia Thing”), a former first lady/senator/secretary of state/presidential candidate and, well . . .  some others.

It galls me in the extreme that Donald Trump would send an image out with the word “treason” under his name. A good number of Americans are wondering the very same thing about the president himself, whether he might have committed the t-word by meeting with Russian operatives who had attacked our supposedly inviolable electoral system during the 2016 presidential election.

This is precisely the kind of thing, the retweeting of such a defamatory image by the president, that reminds us of the kind of man we have representing this country at the highest levels of international relations.

This is the stuff of a bully, the kind of individual who the first lady herself has pledged to combat with her still-unspecified campaign to rid the culture of this hideous behavior.

The 38 percent of Americans who continue to revel in this individual’s presence as president cheer him on. They continue to refuse to acknowledge the shame in knowing that their president is capable of such hideous public pronouncement.