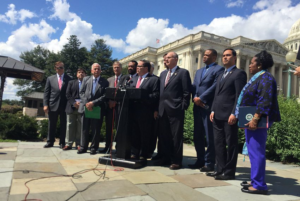 Here’s a thought or two to consider, according to the Texas Tribune.

Texans who have occupied a lot of chairmanships in the U.S. House of Representatives might be set to bail on the House in the wake of the newfound status as the minority party in the lower congressional chamber.

Buried in the Tribune story analyzing that development is a mention of House Armed Services Committee Chairman Mac Thornberry, a Clarendon Republican, who might “make the upcoming term his last.”

That’s according to “many Republican operatives” on Capitol Hill, reports the Tribune.

Thornberry won’t be able to serve as “ranking minority member” of Armed Services; GOP rules mandate that he is term-limited out of that rank. So he’ll become just one of the gang of GOP members serving on the panel.

I have a special “bond” of sorts with Thornberry. He took office in the House in early January 1995, in the same week I reported for duty as editorial page editor of the Amarillo Globe-News. I covered his congressional career regularly until I left the paper in August 2012. He and I developed a good professional relationship.

I rarely agree with his voting record while representing the sprawling 13th Congressional District, although my position at the newspaper required me to write editorials supporting him, given the paper’s longstanding conservative editorial policy.

And, to be fair, Thornberry has been pilloried unfairly over his more than two decades in office because of the term limits issue. He was elected in 1994 as part of Newt Gingrich’s “Contract With America” team of GOP insurgents. The CWA called for term limits for members of Congress. Thornberry never pledged to limit his own service to three consecutive terms, but he did vote to approve it when the House considered it.

He took office in 1995. It’s now 2018. Twenty-three years after becoming a freshman member of the House, Mac Thornberry is about to become a former chairman of a key congressional committee. The Republican majority is set to become the GOP minority. That, according to the Texas Tribune, might be enough to send Thornberry packing and returning to the Texas Panhandle in 2021.

Yep, elections do have consequences. We’re about to see one of those consequences occur on the new day that is about to dawn over Capitol Hill.