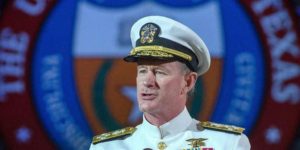 The tumult caused by Donald Trump’s disparagement of a heroic Navy SEAL continues at full boil.

Why is that? Because the president of the United States won’t back down from the hideous criticism he leveled at retired Admiral William McRaven, the fellow who coordinated the May 2011 commando raid that took down Osama bin Laden.

McRaven, who’s now a private citizen, had criticized the president’s war on the media as a grave “threat to democracy.” Trump then responded in an interview with “Fox News Sunday” host Chris Wallace that McRaven should have gotten bin Laden “much sooner.”

Yep, he criticized the architect of the operation. He in effect denigrated the service of a heroic American warrior, who spent 37 years wearing the uniform in service to his country. He was injured training to become a SEAL. He also led the team that captured the late Iraqi tyrant Saddam Hussein in 2003.

So, for this president — who actually avoided service during the Vietnam War — to criticize a hero simply is beyond my own ability to comprehend. He called McRaven a political hack, a Hillary Clinton “backer” and a fan of President Obama.

Admiral McRaven is as admirable a man as one could find.

One thought on “This tempest just won’t go away”