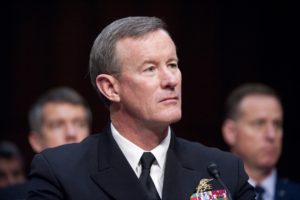 Donald Trump isn’t known for picking his targets with much care or thought. His “shoot-and-aim” approach to firing criticism scores points with his base; not so much with the rest of us.

Fox News’s Chris Wallace asked the president to respond to former Admiral William McRaven’s criticism that the greatest threat to America is Trump’s demonization of the media.

The president’s response? He wonders why McRaven, the former head of the U.S. Special Forces Command, didn’t bring justice to Osama bin Laden sooner than he did.

You see, McRaven — a retired Navy SEAL — was on duty in May 2011 when U.S. commandos flew into Pakistan and engaged in a firefight with the al-Qaeda leader’s garrison. The troops then killed bin Laden — the 9/11 mastermind — and transported his corpse to the USS Carl Vinson, where he was given a “burial at sea.”

Trump said to Wallace that McRaven could have gotten bin Laden sooner than he did. He seemed to imply incompetent military and intelligence leadership as the reason that bin Laden was able to hide in plain sight in Abbattobad, Pakistan. He called McRaven a “fan” of Hillary Clinton and “backer” of Barack Obama. I’ll add here that Clinton was the secretary of state at the time of the raid and, oh yes, Obama was the president who issued the order to launch the mission, which I should add was carried out with no loss of American lives.

Take a look at Trump’s answer to Wallace’s question about whether the president would give credit for the mission that took down bin Laden: “They took him down but — look, look, there’s news right there, he lived in Pakistan, we’re supporting Pakistan, we’re giving them $1.3 billion a year, which we don’t give them anymore, by the way, I ended it because they don’t do anything for us, they don’t do a damn thing for us.”