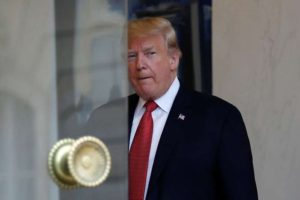 Donald J. Trump is so adept at tossing out unfounded and unsubstantiated allegations it’s getting difficult to zero in on matters deserving of comment.

But here’s one that does. The president has tweeted an allegation of electoral theft in Florida — without any evidence, quite naturally — because officials there have ordered a recount of ballots in the races for U.S. senator and for governor.

Democrats and Republicans are locked in vise-tight battles for both offices. Trump now has warned of possible theft of the election moments after the recounts were declared.

Hey, he’s a pro at this kind of fear-mongering. Remember how he contended that “millions of illegal aliens” voted for Hillary Clinton in 2016, accounting for her nearly 3 million vote lead in the popular vote?

America is still waiting for proof of that allegation, Mr. President.

He once warned of a “rigged election” were he to lose the 2016 presidential contest. Hah! He won that election, but hasn’t said a disparaging word about the allegation over whether Russian interference might have “rigged” the results in his favor.

How about letting the recount proceed, Mr. President. We don’t need to hear another word from you on whether there’s any “theft” involved. If the Republicans end up winning the Senate seat and the governorship, at least they will have ensured that all the ballots are counted. The same thing will hold true as well even if the Democrats emerge victorious.

That’s how the system works.