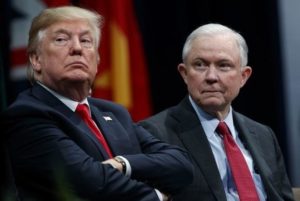 He said the AG will remain on the job “at least” until the midterm election. After that? Hmm. No guarantee. All bets are off.

The president told Bloomberg News that Sessions should have told him he would recuse himself from the “Russia thing” before he was nominated to be the nation’s top law enforcement officer.

Trump then disparaged yet again the professionals who work in the trenches in the FBI and Justice Department. He said he wants Sessions to do a good job. He doesn’t seem to expect Sessions to deliver the kind of work Trump expects.

And what does he expect?

Fealty. Blind loyalty. No adherence to the rule of law. No sense of duty to the country over loyalty to the president.

Don’t misunderstand me on this point: I am no fan of the attorney general. He was denied a federal judgeship by the Senate in the late 1980s over some racially insensitive remarks attributed to him. He then joined the Senate and had a mediocre legislative career before Trump nominated him to run the Justice Department.

Just maybe the then-brand-new president could have foreseen trouble down he pike by declining to nominate Sessions as AG in the first place. Oh, no. He decided instead to blame the AG for prolonging an investigation into alleged hanky panky between his campaign and a hostile foreign power.

How did he do that? By doing the right thing and recusing himself!

Jeff Sessions’s time as head of the DOJ is diminishing … rapidly.