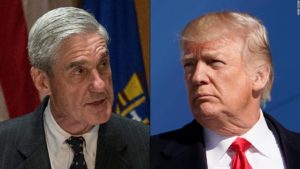 Who, I have to ask of the president of the United States, comprise the “great legal minds” who have concluded that special counsel Robert Mueller is conducting an “illegal” investigation into alleged Russian “collusion” with the 2016 Trump presidential campaign?

He calls Mueller’s investigation illegal because those great minds said the Justice Department shouldn’t have appointed a special counsel in the first place.

Please. Spare me the hideous assertion.

Mueller’s appointment in 2017 by Deputy AG Rod Rosenstein was hailed universally by lawmakers on both sides of the great — and widening — political divide. Trump even said he would cooperate fully with Mueller. Since then he has changed his tune dramatically.

He now calls Mueller’s probe a “witch hunt.” He detests Attorney General Jeff Sessions from recusing himself from the Russia investigation, given that Sessions was a key player in the campaign. He had to recuse himself. The AG had no choice.

As for Mueller, his investigation is above board. It is legal. It is appropriate.

Moreover, it needs to conclude under its own power.