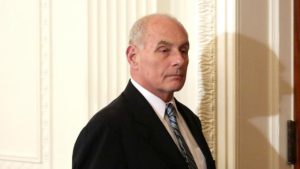 Donald J. Trump has asked John Kelly to stay on as White House chief of staff.

Kelly has agreed — reportedly — to remain at his post at least through the 2020 election.

This leaves me with decidedly mixed feelings. First of all, I admire Kelly at many levels. He is a former Marine Corps general. He’s a combat veteran, and a Gold Star father who lost his son in combat in Afghanistan. He is a no-nonsense guy who took over a White House post in serious disarray in the summer of 2017.

Kelly answers to a guy who is as unfit for the office of president as anyone can possibly be. Trump continues to baffle and befuddle his key aides, advisers and staffers. His Twitter tirades catch everyone by surprise. That includes Kelly.

I am having difficulty, thus, believing that Kelly will last through the 2020 election.

Can the chief stay the course?

We’ve all seen the video of Kelly reacting to the president’s berating German Chancellor Angela Merkel at the recent NATO meeting over her country’s natural gas deal with Russia; Trump said Germany is under Russia’s “total control,” causing Kelly to appear to look away in disgust at what Trump was saying.

It forces me to wonder: How many more times can Kelly endure this kind of idiocy pouring out of the president’s mouth?

The White House chief of staff job is stressful enough as it is. The job in the Donald Trump administration becomes an impossible task — especially for someone with the legendary discipline that a Marine Corps general-grade officer must possess.