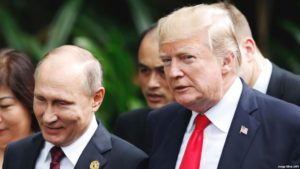 There once was a time, not that long ago, when Republican Party politicians bristled at the notion of cozying up to Russia, the direct descendants of what President Reagan once called The Evil Empire.

They would rant and roar at the prospect of Democrats talking nice to the Russians. They would argue that the Russians weren’t to be trusted as far as we could throw them.

The 2012 GOP presidential nominee, Mitt Romney, called Russia the world’s greatest geopolitical adversary of this nation. Democrats laughed at Mitt. I admit to being one of the critics who dismissed Mitt’s view; I regret what I said then.

These days the one-time Party of Reagan has been captured and co-opted by Donald J. Trump. The current president is unlike any human being who’s ever been elected to the high office.

He talks nice to the Russians. Get this: He now disparages and disrespects our allies. He scolds our North Atlantic Treaty Organization friends for failing to pay enough to defend themselves. The president’s NATO diatribe plays directly into the hands of Russia.

I’m trying to imagine what the Republican Party hierarchy would do if, say, Barack H. Obama had done any of the things that his immediate successor has done. They would collapse into spasms of apoplexy. They would call for the president’s head on a platter. They would impeach him in a New York nano-second.

This is a strange new world, dear reader. It’s making me nervous.

The president of the United States is supposed to be a source of wisdom, stability and dignity. Instead, we have someone at the top of our governmental chain of command who has turned everything on its head.

What’s more, the political party with which he is affiliated is buying into it. The Russians are the good guys now? We are scolding our allies and giving comfort to our No. 1 adversary?