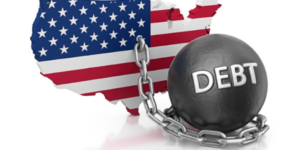 Donald Trump made a lot of promises when he ran for president of the United States.

Many of them were bold and audacious. One of them involved the national debt. He reaffirmed to the Washington Post in April 2017 that he would wipe it out over eight years, presuming he would be re-elected in 2020.

Let’s see. How’s he doing? Not too well. The national debt has, um, exploded in the first year and a half of his presidency. It has surged past the $21 trillion mark and is proceeding at a breakneck pace well beyond that total.

The Congressional Budget Office is reporting that the national debt, fueled by tax cuts and immense increases in government spending, is on a fast track into deep outer space.

According to CBS News: “At 78 percent of gross domestic product, federal debt held by the public is now at its highest level since shortly after World War II,” the CBO found. “If current laws generally remained unchanged, the Congressional Budget Office projects, growing budget deficits would boost that debt sharply over the next 30 years; it would approach 100 percent of GDP by the end of the next decade and 152 percent by 2048. That amount would be the highest in the nation’s history by far.”

Republicans were so very quick to excoriate Democratic President Barack H. Obama over the national debt. The GOP’s 2012 presidential nominee Mitt Romney sought to make the debt one of the centerpieces of his effort to defeat Obama. Then came Trump, the dealmaker in chief, the business tycoon and, oh yes, the self-proclaimed “King of Debt,” to tell us he would eliminate the national debt by the end of his presidency.

Well, at this rate, Mr. President, you have to get busy.