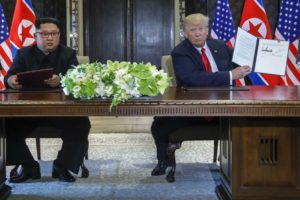 Vox.com, an online news and commentary service, has suggested that Donald J. Trump told another whopper when he said North Korea has committed to “denuclearization of the Korean Peninsula.”

Vox.com calls the president a liar on that one. Imagine that.

I’m going to give Trump a bit of the benefit of the doubt on that one. I don’t believe he knows what he and Kim Jong Un agreed to when they met earlier month in Singapore. Thus, he might not be lying purposefully; he is ignorant of the agreement.

Here is what Vox.com reported: Well, here’s what the joint agreement says on that: “Chairman Kim Jong Un reaffirmed his firm and unwavering commitment to complete denuclearization of the Korean Peninsula.” It shortly afterward adds a vital caveat: “[T]he DPRK commits to work toward complete denuclearization of the Korean Peninsula.”

That is not the same as Kim agreeing to “a total denuclearization of North Korea.” Not at all. Not even close.

It’s seriously egregious for the president to deliberately deceive us on a statement that carries such an enormous impact on the prospect for world peace.

It also is damn grim if the president simply doesn’t understand, or grasp, or comprehend what he and a fellow head of state agreed on.

Yet there was the president at that rally this week in Duluth, Minn., declaring that he and Kim Jong Un have reached an agreement to remove the nukes from North Korea’s weapons arsenal. The crowd at the rally offered throaty cheers and an “atta boy!” at the president. Except that he didn’t tell them the truth.

Vox.com points out correctly that the two men didn’t get anywhere the finish line when they parted company in Singapore.

Donald Trump, as many of us have noted repeatedly since he became president, doesn’t know what the hell he is doing.