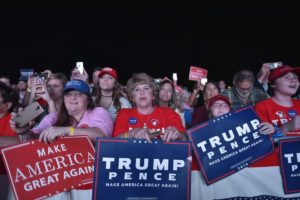 The Party of Abraham Lincoln has become …

So it appears as longtime Republicans of stellar standing are calling it quits on their party.

Perhaps the most notable recent defection came this week as Steve Schmidt, Sen. John McCain’s 2008 presidential campaign adviser and GOP “strategist” renounced his party and said he intends to start voting for Democrats. He calls the Republican Party “vile” and said it no longer represents the high and noble ideals that produced its founding in the mid-19th century, which was to end slavery.

There have been other well-known Republicans. Former U.S. Rep. — and current TV talk show host — Joe Scarborough is one; Pulitzer Prize-winning journalist George Will is another.

Geraldo Rivera, whose own Republican credentials at best are a bit suspect, told his fellow Fox News colleagues that the GOP has become the “party of child abuse.”

U.S. Sen. Bob Corker, the Tennessee Republican who’s leaving the Senate at the end of the year, referred to the “cult” that is developing within the GOP. Other Republican officeholders and office seekers are reluctant to cross the president for fear of being skewered by him.

U.S. Rep. Mark Sanford of South Carolina criticized Trump, who then endorsed his GOP primary opponent. What happened? The opponent won and Sanford will be out of office at the end of the year, if not sooner.

Yes, it’s fair to ask: What in the world has happened to the Grand Old Party, which once was known as a great political party?

It’s been co-opted by a guy who before he ran for president had no political experience. He had no public service experience. He still has virtually no knowledge of how government works or how it requires teamwork that involves players from both sides of the aisle.