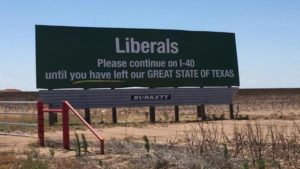 Media are reporting something good coming out of something hideous.

Fox News says that ghastly sign that invited “liberals” to “please continue on I-40 until you have left our great state of Texas” has been taken down.

I don’t live in the Texas Panhandle these days, so I’m left to take the media outlet at its word, that the sign is gone. It had been erected in Vega, Texas, just a bit west of Amarillo.

I’m wondering now about the why and by whom. Why did the person who put the sign up decide to remove it? I’ll hold out some glimmer of hope that whoever is responsible for it got shamed into taking it down.

The billboard that contained the sign is owned by Randy Burkett, a former Amarillo City Council member. He served a single term from 2015 to 2017, then decided he wouldn’t seek a second term.

Good deal, yes? Given his ownership of this billboard, I’d say “yes, definitely.”

Such a closed-minded point of view on a well-traveled public interstate highway sends a chilling message to those passing through. Their unmistakeable takeaway is that people with a “liberal” or “progressive” world view are not welcome here.

What the hell kind of message is that to send in a nation that is supposed to welcome all kinds of thought and political expression?

I do hope the message is gone. I also hope it stays gone.

As for who put the sign up and then took it down, may this individual — whoever he or she is — decides to exercise at least a modicum of discretion when expressing a political point of view.