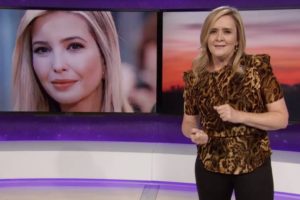 I don’t want there to be a hint of acceptance for what has been said recently about Ivanka Trump, the daughter of the president of the United States.

Comic Samantha Bee used a hideous, profane slur regarding Ivanka Trump. She should be condemned for using that kind of language against her. Bee has apologized for calling her the “c-word.” No word on whether Trump accepts the apology.

That said, Daddy Trump’s demand that Bee should be punished by the TV network that hired her is hideously hypocritical. Then again, hypocrisy is part of the president’s modus operandi.

Ted Nugent, the guitarist/NRA activist/Trump supporter used the same word when referring to former first lady/secretary of state/U.S. senator Hillary Rodham Clinton. Trump’s reaction to the Motor City Madman’s foul mouth? He invited him to the White House to pose for pictures with him, along with Sarah Palin and Kid Rock.

My point is that Trump’s selective outrage is so very transparent — while being so astonishingly phony at the same time.

Samantha Bee said something she clearly should not have said about Ivanka Trump. To be honest, I know little about Bee — far less about her than most of us know, or think we know, about the president’s daughter. I’m not likely to take a single thing Bee says in the future with any degree of seriousness.

However, Ivanka’s father needs to calm down and reflect — although I doubt he is capable of serious self-reflection — about how he has treated other public figures’ use of that identical derogatory term.

Furthermore, the president himself has exhibited his own brand of rhetorical callousness.

Oh, I almost forgot: Donald Trump is “telling it like it is.”