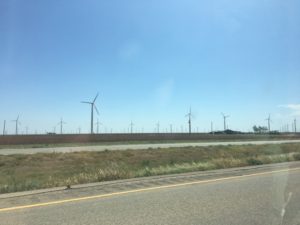 SNYDER, Texas — This picture really doesn’t do justice to the subject of this blog post, but I thought I’d show it anyway.

I snapped this shot Thursday as we sped along U.S. Highway 84 on our way to Interstate 20. I intended for it to show the seemingly endless array of wind turbines along this stretch of West Texas highway.

It begs a question I have had kicking around my noggin for some time: Where is U.S. Energy Secretary Rick Perry and why isn’t he using his new federal platform to carry the message of wind power to the nation?

I ask the question for what I believe is a valid reason. He served for 14 years as Texas governor and on his watch as the state’s leader, Texas became a model for alternative energy production through the use of wind turbines. Texas and California moved to the head of the line in the promotion of wind energy.

Think about that for a moment: Two states with wildly different political profiles had this one important energy-related matter in common!

You see them everywhere in West and South Texas. For as far as you can see — and even if you stand up on your tip toes — you see the turbines blowin’ in the wind. They are cranking out megawatts of electrical power. For every megawatt of wind-generated electricity, that’s a megawatt that is not necessarily produced by fossil fuels.

Wind energy is as clean as it gets. “Clean coal” is a misnomer, yet the Donald Trump administration keeps harping on its plan to “save” coal jobs by producing clean coal energy.

Those of us who live — or have lived — in West Texas also know that wind energy is the ultimate renewable energy source. Those fossil fuels? They’re finite, man! You pull the oil out of the ground, it’s gone forever. The wind keeps coming. It keeps blowing. It keeps providing “fuel” to make those turbines turning and making energy.

Rick Perry knows how this system works. If only he would use his Cabinet post as a bully pulpit to promote it to the rest of the energy industry.

His silence is quite unbecoming.