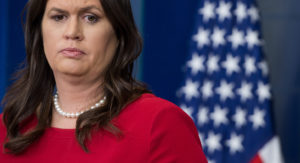 “We give the very best information that we have at the time.”

So said White House press secretary Sarah Huckabee Sanders in response to a question about her boss, Donald Trump, and his “blatant disregard for the truth.”

Now all of that has been tossed aside.

I’ll stipulate once again that I have been no fan of Sanders’s conduct as White House press flack. However, truth be told (no pun intended), she is being asked to do the impossible. She cannot speak the truth because she is not given the truth up front from the president or those who comprise his inner circle.

According to Politico: Not just in Thursday’s briefing, but overall, “the best information we have at the time” has become something of a go-to line for Sanders — her version of apparently throwing up her arms in the face of a president who has proved not only impulsive and prone to changing his mind, but who has exhibited an unprecedented propensity for falsehoods. As his official spokesperson, Sanders’ performance in Tuesday’s briefing left some reporters further questioning not just the president’s credibility, but also that of his press secretary and the entire White House.

I won’t go nearly so far as to express sympathy for Sanders. She surely had to know what she was buying into when she replaces Sean Spicer as White House press secretary. It well might be that Spicer warned her up front: Be careful, Sarah; the boss can’t tell the truth … about anything!

I hate believing that Sanders is a willing participant in the president’s penchant for prevarication. Her willingness to remain at her post, though, seems to give critics such as yours truly little choice to believe the worst in the White House press secretary.