I have no legal background. I spent a career writing news stories and offering commentary on issues of the day as a journalist.

There. That said, I am going to express some bafflement at Rudolf Giuliani’s decision to join Donald J. Trump’s legal team with the aim of finding a quick conclusion to a special counsel’s expansive and exhaustive examination of allegations of collusion involving the 2016 presidential election.

I stood behind the former New York mayor when he rose to the challenge of repairing his city that was shattered by the attack of 9/11. 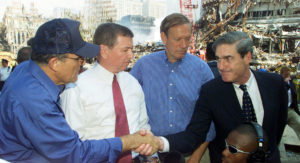 Giuliani reportedly has plenty of shared history with Robert Mueller, the special counsel who’s been conducting the investigation. Indeed, Mueller became FBI director right before the 9/11 attack (see picture above).

But since that time, the former mayor has become a political pit bull. He is a fierce defender of Donald J. Trump, whose campaign is being examined by Mueller and his team of legal eagles.

I am having trouble understanding just how this man, Giuliani, intends to persuade Mueller to button up his examination quickly. The way I understand it, Mueller is a meticulous prosecutor, careful in the extreme to protect evidence gathered.

What’s more, Mueller already has indicted some individuals close to the president’s campaign. There appears to be much more ground to plow before he brings this probe to an end.

As Politico reports: Mueller likely still has much work to do. At a minimum, he must see through his case against former Trump campaign chairman Paul Manafort, who has pleaded not guilty to charges including bank and tax fraud and is set to face trial starting in July.

So, the question remains: How is the man once called “America’s Mayor” going to push Mueller to conclude at least portions of this investigation in a speedy fashion?

This layman out here in Flyover Country doesn’t see any way in the world that will happen. Robert Mueller will conclude this investigation at his own pace … if he’s given the chance to complete his work.