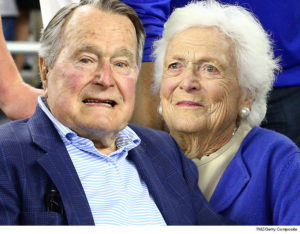 I cannot let this day pass without offering one more tribute to Barbara Pierce Bush, although I won’t take any credit for a profound description of her offered today during her funeral.

It came from historian, author and journalist Jon Meacham, who called Mrs. Bush “the first lady of the Greatest Generation.”

She died this week at age 92. She was married for 73 years to the 41st president of the United States, George H.W. Bush, who, before he was elected vice president and then president compiled a stellar record of accomplishment.

Meachem’s tribute to his friend spoke eloquently about the generation of which she was such an integral part. She married the love of her life, U.S. Navy Lt. jg. George Bush, who came home on leave from World War II to marry the love of his life. He had been shot down while fighting Japanese warriors over the Pacific Ocean. He was among the 16 million Americans who answered the call to defeat tyranny and defend the United States of America.

His beloved “Bar” worked at the home front while her man was far away.

Yes, Mrs. Bush served in that unofficial — and until today, it was the first time I’d ever heard it said — capacity as “the first lady of the Greatest Generation.” Indeed, the direct descendants of those then-young American men and women — and that includes yours truly, as my father also fought the tyrants in Europe — understand what Meachem’s tribute was meant to convey.

She stood as strong in defense of our nation’s values as the man she married more than seven decades ago.

I want to thank Jon Meachem for telling us all today about Barbara Pierce Bush’s contributions to forging the Greatest Generation.