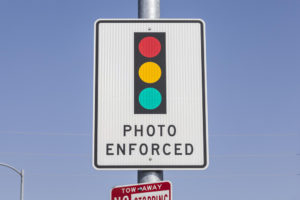 While running an errand in Amarillo, I happened to zip past an intersection where the city has deployed its red-light cameras, the devices used to nab those who disobey the stop lights that command motorists to stop.

It then occurred to me: The city is considering removing the camera from this intersection, at Coulter and Elmhurst streets. And it begs the question: Why would the city take down an enforcement tool that it has declared has worked well, that has fulfilled its mission?

I don’t know what if anything the city has decided. The City Council announced it intends to install more of the devices at other troublesome intersections around the city. The council also might remove some of the cameras, citing areas where there no longer are problems with motorists running through red lights.

Hmm. Why do you suppose that has happened? Oh, might it be the presence of the cameras that have deterred vehicular misbehavior?

It makes me wonder, thus, why the city would want to take down devices that have done their jobs.

I will not accept the canard that keeps popping up from the soreheads around Amarillo who oppose the cameras. They contend the devices are intended to “make money” for the city.

What utter crap! The Texas Legislature imposed strict provisions when it allowed cities to deploy the cameras. One of them requires cities to earmark revenue earned specifically for traffic improvement. So, to suggest — or imply — that the revenue is collected to fatten the budgets of municipal departments or give the city some funds to throw around smacks of demagoguery.

As for the city’s intent to remove the cameras, I hereby encourage Amarillo’s powers that be to rethink that notion. If the device its doing its job at Coulter and Elmhurst, the city would be foolish to invite motorists to return to their red-light-running ways — and put other motorists and pedestrians in potentially dire peril.