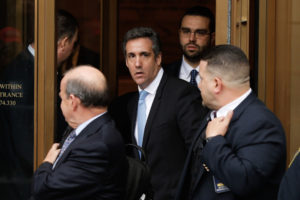 This is confusing to me.

Now we get word that the Trump legal team — or what’s left of it — is preparing to respond if Cohen “flips” and cooperates with special counsel Robert Mueller who might be looking at whether there are some other issues to examine relating to the alleged dozen-year-old sexual encounter.

Does someone who didn’t do what has been alleged have reason to “prepare” for someone to cooperate with investigators?

I keep wondering what the “flip prep” entails and whether the Trump team is going to challenge Cohen’s credibility, call him a liar, impugn his integrity, you know … do the kind of thing Trump has done with others who have accused him doing something improper.

I can’t stop believing that Trump and Cohen have something for which to prepare — and it’s not good for either of them.