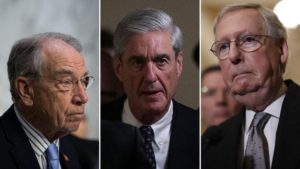 U.S. Senate Majority Leader Mitch McConnell wields plenty of political clout, but he cannot dictate to all key Senate committee chairs how to run their affairs.

Senate Judiciary Committee Chairman Chuck Grassley is one who is bristling at McConnell’s reluctance to allow consideration of a bill to protect special counsel Robert Mueller.

I’m with Chairman Grassley on this one.

McConnell said he sees “no indication” that Donald Trump is going to fire Mueller, appointed by the Justice Department to lead a probe into alleged collusion between the Trump presidential campaign and Russians who meddled in our 2016 election.

No indication? How does he know what the president will do? Trump’s own staff doesn’t know what he thinks from one hour to the next, let alone from day to day, or week to week.

Grassley, meanwhile, wants his committee to vote on a bill to protect Mueller from any whims that might cross the president’s mind to fire him. According to The Hill:

“That’s not necessary. There’s no indication that Mueller’s going to be fired. I don’t think the president’s going to do that, and just as a practical matter even if we passed it, why would he sign it,” McConnell told Fox News.

When Fox News’s Neil Cavuto noted that some Republicans “fear” that Trump will ax Mueller, the GOP leader fired back: “I’m the one who decides what we take to the floor, that’s my responsibility as the majority leader, and we will not be having this on the floor of the Senate.”

Grassley responded: “Obviously the views of the majority leader are important to consider, but they do not govern what happens here in the Judiciary Committee. … If consideration on the floor was a standard for approving a bill, we wouldn’t be moving any bills out of this committee.”

Mueller is doing the people’s work in seeking to learn the truth behind whatever, if any, relationship the president had with Russian government oligarchs or others who wanted to interfere in our electoral process.

There can be little doubt about the explosion that would occur if Trump were to do something so foolish as firing Mueller or Deputy Attorney General Rod Rosenstein, who selected the special counsel.

So, perhaps Trump ought to consider a bill protecting Mueller a bit of a gift. Thus, he might want to tell the Senate majority leader to let this bill reach the floor and allow senators to approve it.

If there’s nothing to the allegation of collusion — as Trump keeps telling us — let Mueller make that determination all by himself without concern that the president will fire him.