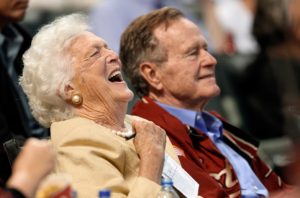 I’ll give credit for this observation where it belongs, to Ana Navarro, a noted Republican political “strategist” and TV commentator.

Navarro offered this via Twitter: Oh my God. 93 year-old George HW Bush, in a wheelchair, in front of Mrs. Bush’s casket, thanking every mourner who comes to pay respects to his love and life partner of 75 years – what an example of respect, stoicism and devotion. Please just pass me the Kleenex. The entire box.

They’re going to say goodbye Saturday to former first lady Barbara Pierce Bush, who died this week at the age of 92.

She is lying in repose at a Houston church and today her husband of 73 years, former President George H.W. Bush and the couple’s daughter, Dorothy, greeted mourners in the church sanctuary. They thanked them by the thousands for coming to pay their respects to the beloved matriarch of one of America’s most iconic political families.

This is how one should remember a first lady who served with class, grace … along with grit, courage and never-ending humor.

It’s been a difficult few days for yours truly as news organizations have told and retold the story of the Bushes’ extraordinary love story, which began in 1941 at a dance. George and Barbara got married in January 1945, when the young Navy officer was home on leave from World War II. Lt. George Bush became the youngest naval aviator during WWII. He came home to marry the love of his life.

This weekend, he will bid farewell to his beloved “Bar.”

First lady Melania Trump will be there, too, as will Bill and Hillary Clinton, Barack and Michelle Obama along with many others who loved and admired this most admirable woman.

Mrs. Bush’s life and service to the country should remind us all of an era when politics didn’t define people, but merely was something they did during the day.

And her husband, as Ana Navarro has stated, has provided us with a moving demonstration of “respect, stoicism and devotion” to the love of his life.