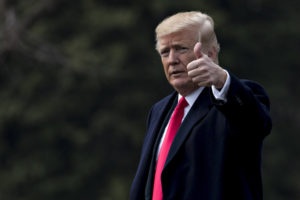 What happened to Donald J. Trump’s alleged penchant for unpredictability?

The president is now telling Russia to “get ready” for air strikes against Syrian targets in response to dictator Bashar al Assad’s latest gassing of civilians, including children.

How does this work? Do the Russians now harden their targets to lessen their losses in the event of an attack? Then there’s the warning that Russian strongman Vladimir Putin plans to “target” U.S. military targets in response to a retaliatory strike.

Trump keeps telling us he likes being unpredictable. He wants to keep our foes and friends alike guessing what we’ll do next. Isn’t that what he has said? Over and over?

This man is playing a dangerous game of chicken.

He is out of control!

As for Assad, he needs to be arrested and ordered to stand trial on charges that he has committed crimes against humanity.