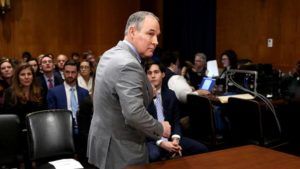 I’ll now join the chorus of those who want to see EPA Administrator Scott Pruitt tossed out of office. He should be shown the door and told to avoid letting it hit him in the backside as he hits the road.

The man was a terrible selection to lead an agency whose mission is to “protect” the environment. The former Oklahoma attorney general made a lot of noise suing the Obama administration, seeking to overturn regulations designed to do the very thing that the EPA is charged to do. The Environmental Protection Agency is now better named the “Environmental Destruction Agency.”

Now he’s in some serious trouble ethically. He and his wife rented a condo from an oil company lobbyist. They got into the place dirt cheap. Meanwhile, the lobbyist was trying to persuade the EPA to roll back regs the oil company the lobbyist was representing wanted rolled back.

Gosh! Do you think there might be a conflict of interest here? I do. So might the president of the United States. At least two Republican members of Congress have called on Pruitt to quit.

Here’s my favorite: Donald Trump has issued a tepid endorsement of Pruitt. And you know how those endorsements usually end up. Trump endorsed former White House strategist Stephen Bannon: gone. He did the same thing for former national security adviser H.R. McMaster: gone.

Trump’s statements of support are worth, oh, just about nothing. Which makes them worth just as much as damn near anything the president says in public, out loud, on the record.

Pruitt is a lousy choice to lead the EPA, even without this latest matter involving a serious breach of ethics.

Get him out of there, Mr. President.