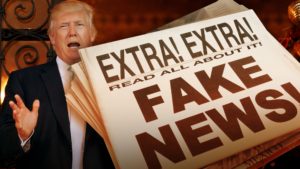 Every time Donald John “Liar in Chief” Trump Sr. throws out the “fake news” allegation, I am reminded only of one thing: The president lacks any sense of self-awareness.

You know the type. These are people who accuse others of doing what they do. It’s a form of projection. Perhaps it’s a pathological condition.

Whatever it is, Trump’s got it. Or he lacks it.

And … why is that? Because the president is the king of fake news.

He perpetuated the lie that Barack Obama was not qualified to serve as president because he allegedly was born in another country. He lied about President Obama wiretapping his offices in Trump Tower after the 2016 election. He lied about witnessing “thousands of Muslims” cheering the collapse of the Twin Towers on 9/11.

He lies without any sense of shame or guilt.

Through all of this, the president has the stones to slap the “fake news” label on any news story he deems to be negative.

Fake news are those items that are demonstrably false. They are made-up tales. They are lies put forward by those who cannot tell the truth. These tall tales are meant to defame others, to do damage to others’ credibility.

The president will never look inward while he accuses others of fomenting “fake news.” It is left to the rest of us to do it for him.

The Liar in Chief is a disgrace to his office.