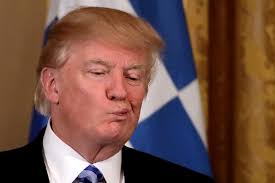 Donald Trump is not at all shy about displaying his delusional traits whenever possible.

He told reporters that the best of the best are lining up, just anxious as the dickens to come to work in the White House, in the West Wing. Why, they’re falling over themselves to get hired by the Trump administration.

Except that he’s lying once again.

The best aren’t lining up. Indeed, the few grownups the president has brought aboard are bailing out right along with the nut jobs, ideologues and individuals under indictment for assorted criminal acts.

Trump wants a trade war. He says it’ll be “easy” to win. Cohn disagrees. Indeed, Cohn was reportedly enraged at Trump’s response to the Charlottesville, Va., riot that killed a young counterprotester. You’ll recall how Trump said there were “fine people … on both sides” of a dispute that included KKK members, neo-Nazis and assorted white supremacists.

Who in the name of good government would want to work in an administration led by someone who would equate racist/hate group members with those who oppose them?

The president’s delusion won’t allow him to recognize what the rest of the world sees clearly. The Trump White House is nothing more than a chaotic clusterf***.