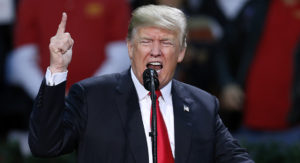 You may count me as one who takes a dim view of those who think they can diagnose medical matters from a distance.

There’s a good bit of that going around these days as it relates to the behavior of the president of the United States, one Donald John Trump Sr.

Yes, he’s acting squirrely. And yes, he tweets messages that sound as if they come from a junior high schooler. He goads a dictator with nuclear bombs. He insults media representatives, politicians and a particular book author … not to mention at least one key former White House aide.

Does any of this mean the man is certifiably crazy? Is he nuts? Is he unfit mentally to be commander in chief?

I am not qualified to answer any of that. Neither are the “experts” who keep insisting the president needs to be kicked out of office on the basis of someone’s long-distance assessment of Trump’s mental fitness.

They don’t know of which they speak.

More than 50 years ago the nation had this same discussion about the late Republican U.S. Sen. Barry Goldwater, who ran for president in 1964 against President Johnson. Goldwater was deemed to be nuttier than a fruitcake because he talked openly about going to war with the Soviet Union, the world’s other great nuclear power at the time.

Someone wrote a book about Sen. Goldwater and put in writing what many were saying out loud. Goldwater sued the author for libel and won. Then came something called the “Goldwater Rule,” which disallows people from issuing medical diagnoses without examining the person about whom they are talking.

I believe we should keep that in mind as we discuss Donald Trump’s conduct of the high office he occupies.

There might be political reasons to remove this guy. They haven’t emerged; perhaps they never will emerge. Medical assessments are best left to those who get close enough to the subject to offer them.

The rest of us are just firing pot shots from the peanut gallery.