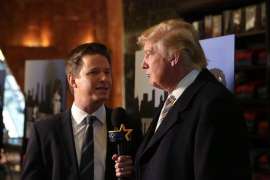 Donald John “Groper in Chief” Trump Sr. now suggests that the audio recording that almost covered him up in some serious political doo-doo might be a fake.

I’m talking about that 2005 recording of Trump boasting about how he could grab women by their private parts because he’s such a star, a celebrity. That status, he boasted to “Access Hollywood” host Billy Bush, gave him license to do terrible things to women.

It’s Trump’s voice on the recording. Of that, anyone who’s heard it can say with supreme confidence.

If the recording is not Trump, that it’s a fake as he reportedly told a U.S. senator, then who is it? Did someone impersonate the man who would become president of the United States?

And while I wouldn’t call Trump’s response to the criticism of the recording when it became known in October 2016 an actual apology, he did have an “explanation” of it in real time. Trump called it “locker room talk,” which I guess was his way of acknowledging that he did say those hideous things.

Now he’s trying to, um, take it all back. He’s suggesting the recording is inauthentic.

This won’t surprise readers of High Plains Blogger, but I … do … not … believe the president’s apparent denial.

The prevaricator in chief, though, seems intent on denying the obvious. Hey, wasn’t he just “telling it like it is”?