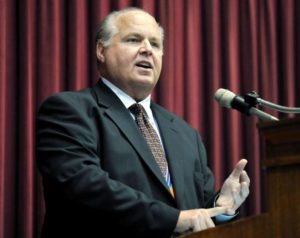 I cannot let this one pass without a brief comment.

Radio talk show host/blowhard Rush Limbaugh is packing up his belongings and heading for safety in the face of Hurricane Irma, which is bearing down on South Florida, where Limbaugh lives.

Why is this even worth anyone’s attention? Limbaugh said on his talk show that the “liberal media” are hyping the dangers of these killer storms to boost their belief in climate change, which I reckon Limbaugh thinks is a hoax — putting him right next to Donald John Trump Sr. in the climate change denier ranks.

I am left to presume that when faced with the grim reality of Mother Nature’s wrath, Limbaugh is going to do the smart thing after all.

Which is to get the heck out of Hurricane Irma’s path..

Do I expect the talk show gasbag to come to his senses? Will he stop blathering the nonsense about climate change?

Umm. Not for an instant.