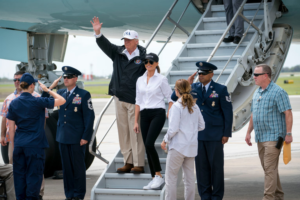 Oh, how I wanted the president of the United States to say all the right things. I wished for Donald Trump to come to Texas to do what presidents are supposed to do.

In this case it would be for him to say publicly how his heart is broken over the misery being inflicted by the deluge left behind by Hurricane Harvey; how suffering Texans are in his prayers, his family’s prayers and that he stands behind them.

I wanted him to speak openly about how tragedy brings people together.

Yes, the president did well to visit Corpus Christi, San Antonio and Austin — and stayed away from Houston, which at this very moment is still battling the rising deluge that has swallowed the nation’s fourth-largest city. He did vow to commit federal resources to aid the stricken state. I’m glad he made that commitment.

But then he stood in front of that microphone in Corpus Christi and proclaimed “What a crowd! What a turnout!”

What an utterly idiotic thing to say!

New York Times columnist Frank Bruni, certainly no fan of the president, lays out well his own disgust at our head of state’s behavior in the wake of Harvey’s destruction. Read Bruni’s column here.

“I keep hoping against hope that a new challenge will tease out a new Trump and that if he malingers in the presidency long enough, he’ll meander in the direction of eloquence, slouch toward poetry and tumble into inspiration. Stranger things have happened. I’ll have to get back to you on what they were.

“But Trump’s hurricane talk and hurricane tweets were like his fair-weather fare: childishly intent on superlatives, puerilely obsessed with size, laden with boasts and lavish with discordant asides.”

The president cannot help himself. He doesn’t seem to be wired in a way that allows him to set aside his self-aggrandizement.

Nothing gets in the way of his narcissism. Not even the unspeakable misery of his fellow Americans that is spread out before him.