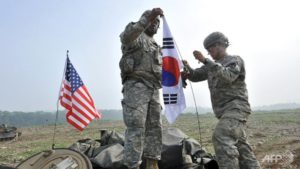 Kim Jong Un has a list of demands he is laying at the feet of the U.S. president.

Most of them seem to present intractable circumstances for Donald J. Trump to ponder.

Such as this one: Removal of all U.S. troops from South Korea.

It’s not going to happen, Mr. North Korean Dictator. It won’t happen at least until North and South Korea sign a peace treaty that comes with ironclad assurances that North Korea won’t ever — ever! — attack South Korea. The agreement also needs to include a denuclearization component, meaning that Kim needs to dismantle and abandon his ambitions to become a nuclear power.

Our troops commitment to South Korea was purchased with lots of blood. The Korean War’s hostilities ended in 1953 after more than 50,000 American personnel were killed in action. We came to South Korea’s defense after North Korea invaded its neighbors three years earlier. Indeed, Kim’s grandfather, Kim Il Sung, sent the troops south. So, that means the current North Korean dictator bears a bit of personal responsibility for what transpired, given that he is kin to the man who launched the aggression in the first place.

The ceasefire that both sides signed in 1953 included a commitment from the United States to defend South Korea against the North, given that the two Koreas are technically still in a state of war; no peace treaty means they cannot put their guards down.

There are roughly 28,000 U.S. troops in South Korea. That’s just part of the defense network. We have heavily armed naval vessels throughout the region and immense air power assets in places such as Guam and Japan — not to mention in South Korea.

Should we give all that up without a serious commitment to peace from North Korea?

The boy with the bad haircut — that would be Kim — surely knows we cannot do anything of the sort.