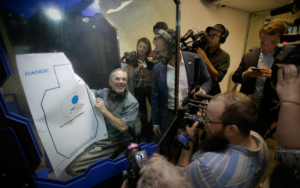 What is it about politicians who make lame jokes and then fail to own them?

Texas Gov. Greg Abbott is just the latest in a long and growing line of pols who have committed that transgression.

But here’s the deal: Abbott’s lame joke is speaking to a larger — more serious — issue involving the media and the politicians they cover.

The governor this past week signed into law a bill that reduces the amount of money that concealed handgun carry applicants must pay to obtain their license. Then he went to a shooting range, fired a few rounds at a target and then joked that he would carry the target around “in case I see any reporters.”

You see, it’s the context of Gov. Abbott’s remarks that are so damn troubling.

We can thank the president of the United States for it.

Donald Trump has all but declared war on the media. He calls them the “enemy of the people.” He accuses mainstream news outlets of producing “fake news.” He refuses to answer tough questions from the media. He calls news media outlets “a disgrace” and calls reporters “among the most dishonest people” anywhere. He reportedly told the then-FBI director that reporters should be jailed if they report on leaked classified material.

Trumpkins show up at his rallies wearing t-shirts that suggest journalists should be hanged.

Now the governor of Texas makes a goofy joke that seems to suggest it’s OK to shoot reporters. He won’t take it back. He won’t apologize for the hideous timing of the remark, coming as it did just two days after a Republican congressional candidate “body slammed” a reporter for asking him about the GOP health care overhaul.

Is this the era into which we have entered? That it’s OK to intimidate reporters for doing their job? That the First Amendment protection of a “free press” isn’t to be taken seriously, let alone literally?

Mimi Swartz, writing for Texas Monthly, has asked the governor to take it back. You can read her essay here. I don’t expect Abbott to do as she asks.

Sadly, neither do I expect the president of the United States to back off his own campaign against the media assigned to report his actions to the people he governs.