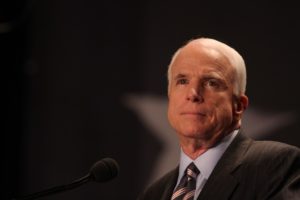 Mitt Romney issued a warning in 2012 that many Americans — yours truly included — derided as hopelessly out of touch.

Perhaps you’ll remember when he declared Russia to be the world’s “No. 1 geopolitical threat.” President Obama all but laughed him out of the proverbial room.

The president spoke instead of the threat presented by international terrorism. Many of us agreed with the president and not the then-Republican Party nominee who was running against him.

It well might be that Mitt was ahead of his time five years ago. Republicans in Congress are starting to echo their party’s one-time presidential standard bearer.

Sen. John McCain is one of them. Speaking to an Australian radio station, McCain said: “I think ISIS can do terrible things. But it’s the Russians who tried to destroy the fundamental of democracy and that is to change the outcome of an American election.”

It’s still to be determined just how much impact the Russians had on the 2016 electoral outcome, but they surely have succeeded in throwing the U.S. political debate into a tizzy.

Indeed, the Russians still possess a lot of nuclear weapons. They have a formidable conventional military force, which they have used in places like Ukraine and Syria.

Are the Russians the most fearsome political foe we face?

Yes, it looks that way to a lot of us — and, yes, that includes yours truly.

I regret that I doubted you, Mitt.