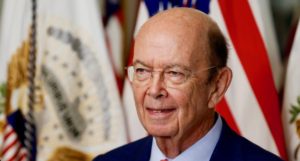 “There’s no question that they’re liberalizing their society, and I think the other thing that was fascinating to me, there was not a single hint of a protester anywhere there during the whole time we were there,” Ross said in an appearance on CNBC. “Not one guy with a bad placard.”

Someone ought to inform the secretary that public protest in Saudi Arabia remains highly illegal. Protesters generally are rounded up, arrested, given lashes until they bleed … you know, the kind of thing that occurs in countries run by repressive regimes.

CNBC reporter Becky Quick sought to inform Ross of those prohibitions. He answered:

“In theory, that could be true,” he replied. “But boy, there was certainly no sign of it. There was not a single effort at any incursion, there wasn’t anything. The mood was a genuinely good mood, and at the end of the trip, as I was getting back on the plane, the security guards from the Saudi side who’d been helping us over the weekend all wanted to pose for a big photo op, and then they gave me two gigantic bushels of dates as a present, a thank you for the trip that we had had. That was a pretty from-the-heart, very genuine gesture and it really touched me.”

I believe I will stick with the American way. It allows protests. It gives people the freedom to speak angrily against the government, although the only stipulation I can find in the First Amendment is that it guarantees the right of citizens to protest “peaceably.”

Violence? Nope. Can’t do that, not even in America.

It still sure beats the dickens out of the prohibitions against such behavior in Saudi Arabia.