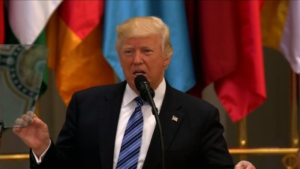 I know I didn’t dream this, but didn’t Donald J. Trump once accuse Republican rival Jeb Bush of being “low energy Jeb” and didn’t he say that Democratic presidential nominee Hillary Rodham Clinton lacked the “stamina” be president of the United States?

So … what happened to the president in Saudi Arabia? He blurted out the term “Islamic extremism” when he meant to say “Islamist extremism.” Muslims understand the difference between “Islamic” and “Islamist.” The former term often is used to lump all Muslims in with the monsters who terrorize innocent people.

The president’s staff blamed the slip on “exhaustion.” Trump was pretty darn tired, they said. He didn’t mean what he said, supposedly.

This is not that big of a deal. It does, however, point out the danger of the kind of rhetoric that poured out of a presidential candidate’s mouth and it brings into sharp relief his performance while holding the office he fought so hard to obtain.

I won’t stoop to calling the president any of the names he hung on so many of his political rivals.

I just thought I would remind everyone of what he said about others and how they might feel now that he’s sitting squarely in the hot seat.

Just think, too: He did this at the beginning of his first overseas venture as president. I mean, c’mon! He had all the time in the world to rest up and get ready for it.