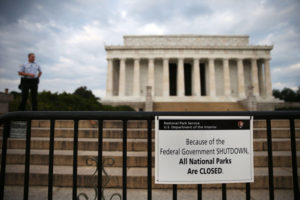 Donald J. Trump is wearing me out.

He keeps saying outrageous things, forcing bloggers and other commentators such as yours truly to figure what the hell the president is trying to convey.

Get a load of this one, the latest bit of crap-ola to fly out of Trump’s mouth: He now says the government can use a “good shutdown” in September when the money to fund it runs out.

Has there ever been another president of the United States who has uttered such abject nonsense? Umm, let me think. No. There hasn’t.

As The Hill reports, it appears the president has grown frustrated with Congress, which has approved a funding measure that keeps the government operating, but includes zero money for that “big, beautiful wall” Trump wants built along our southern border with Mexico.

According to The Hill: “Democrats have argued that they won most of the battles surrounding the bill, and several media accounts have suggested that Trump and the White House were losers in the negotiations.

“A New York Times headline on the deal said: ‘Winners and Losers of the Spending Deal (Spoiler Alert: Trump Lost).'”

With the president, it’s all about winning and losing. He wants money to build that damn wall because it would constitute a “win” for him and his White House team.

As for the government shutdown idea, that’s pure idiocy. Then again, if Trump had any knowledge or experience with government — or perhaps any sense of the good that government can do for those who need assistance — he wouldn’t have made such a ridiculous statement, which he made via Twitter.

House Speaker Paul Ryan defended the president’s rant. “The president’s tweet was that we might need a shutdown at some point to drive home that this place — that Washington needs to be fixed,” Ryan said. “I think that’s a defensible position, one we’ll deal with in September.”

Shutting down the government can “fix” Washington? Oh, here’s an idea: Why doesn’t the president summon congressional leaders of both parties to the White House and start talking to all of them about constructive solutions?

That would fix Washington … wouldn’t it? It also would keep the government running and serving those Americans who need help.