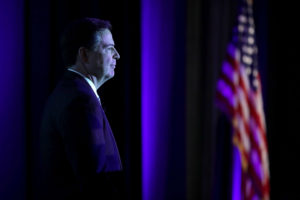 I continue to have great respect for FBI Director James Comey — even after reading a lengthy New York Times article providing excruciating detail about how might have changed the course of political history with a single letter to Congress.

Comey was holding on to information that I reckon he felt he had to make public while keeping secret other information related in some fashion to what he was about to disclose.

Did the nation’s top cop swing the 2016 presidential election all by himself by giving up the goods on Hillary Rodham Clinton while keeping quiet what he was looking at regarding Donald John Trump? I don’t believe that’s the case. But, damn! He made a tough call at the just the wrong time!

The article is long, but worth your time. It details the agony that Comey endured during the final months of a bitter presidential campaign.

Eleven days from Election Day, Comey decided he had to send a letter to Congress telling lawmakers that he had more information that might be pertinent to an investigation he had concluded regarding Clinton’s e-mail use during her time as secretary of state.

Do you remember how he held that press conference in July 2016 in which he criticized Hillary’s “careless” use of the personal server? And how he then said he had no grounds to prosecute her? That presser was, in itself, highly unusual.

When some more e-mails became available, he then seemed to believe he owed the public some sort of explanation of what he found.

But, man, the timing was terrible!

While all this is engulfing the campaign, we didn’t know that Comey’s agency was probing allegations that Trump’s campaign might be colluding with Russian computer hackers seeking to influence the election, trying to help the Republican nominee defeat Hillary.

He didn’t reveal any of that. Indeed, he only went public with that tidbit just a few weeks ago during a congressional hearing.

FBI policy had been to stay out of partisan political activity. It cannot be seen as a factor in deciding elections. I get it. So does everyone else.

As for whether Comey’s disclosure of the e-mail issue late in the campaign and whether it proved decisive … I’ll simply make this point: Hillary Clinton’s campaign never should have had to worry about an election outcome in the first place.

She and her team made enough mistakes without that disclosure to keep Trump’s campaign close enough to catch them.

Hillary Clinton is far more qualified to be president than the man who defeated  her. Her abject failure to communicate with voters as a living, breathing human being — to talk directly to them and to spell out a clear vision for how she intended to lead the country — doomed her effort to make history.