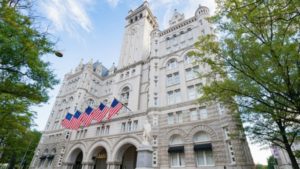 How in the world does Donald John Trump get away with this?

He serves as president of the United States. He continues to hold onto business interests, such as the Trump International Hotel, which plays host to foreign government leaders; those foreign governments spend money doing business at this hotel.

And the president somehow doesn’t violate the “emoluments clause” of the U.S. Constitution, the clause that says president’s cannot accept money or other inducements from foreign governments?

It’s an anti-bribery clause, in a manner of speaking.

Yet the president continues to dine there, which I suppose he is entitled to do. What is making my head spin is how this particular hotel can, in the words of The Hill, be the “go-to” place for foreign government dignitaries.

Isn’t the Constitution clear about this?

The emoluments clause is in the very first article of the Constitution. The founders were clear, I have thought, to prevent the president from doing any form of private business with any “King, Prince or foreign State.”

Let’s remember that Trump hasn’t divested himself of his vast business empire; he’s handed it all over to his sons

But as The Hill reports: “The hotel has been the go-to location for foreign leaders and dignitaries since it opened last fall, when Trump was still a presidential candidate.”

He’s no longer a candidate. He’s now the man. The president of the United States. Leader of the free world. Commander in chief. Head of state.

Unless he’s giving away all the services his hotel is providing those foreign “dignitaries and leaders,” it seems to me that he’s committing an unconstitutional act.