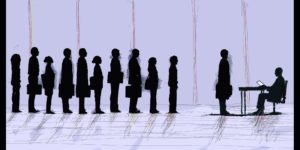 Donald John Trump is demonstrating yet again just why he makes me sick to my stomach.

The U.S. Labor Department today announced that 235,000 non-farm jobs were added to payrolls in February, the first full month of Trump’s presidency; the jobless rate declined to 4.7 percent.

Those are impressive figures. What does the president say?

He declares those numbers are “real” even though he said multiple times during his campaign for the presidency that the Labor Department was cooking the books during Barack Obama’s presidency. He called the job growth registered during President Obama’s time in office “fake”;  he said the numbers were phony; he said the “real jobless rate” was much greater than what the Labor Department was reporting.

As White House press secretary Sean Spicer said today, quoting the president: “They may have been phony in the past but they’re real now.”

Trump sickens me for many reasons. At many levels. You name it.

He lies, slings innuendo around, insults his foes, boasts openly about his own prowess.

The job figures are impressive. The president should simply have acknowledged them as progress toward the nation’s continuing economic recovery.

But no-o-o-o! He had to remind millions of us why we detest him.