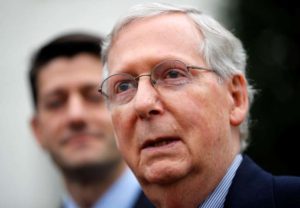 Two words, four letters altogether. That’s all it seemed to take for U.S. Senate Majority Leader Mitch McConnell to put the kibosh on Donald Trump’s notion of getting another nation to pay for his “great, great wall” across our southern border.

Is that the end of it? Probably not.

McConnell’s terse response was to a question about whether Mexico would pay for the wall Trump wants to build. Mexican President Enrique Pena Nieto has insisted vocally, categorically and with maximum emphasis that Mexico wouldn’t spend a peso to build the wall.

Here’s how NBCNews.com reported the senator’s response: “‘Do you believe that Mexico will pay for it [the border wall]?,’ Politico Playbook’s Jake Sherman asked. McConnell, R-Ky., flatly responded, ‘Uh, no.’

“McConnell said he believes that there are certain areas along the border that don’t need a border wall to secure the area.

“The border wall, which is estimated will cost $21.6 billion dollars to build, has spurred a lot of controversy in the United States and Mexico.”

A lot of controversy? Do you think?

The president of the United States might think he can get another sovereign country to do his bidding. Except that the term “sovereign” explains precisely why he cannot.

Imagine for just a moment the Canadians demanding the same thing of this country should a tide of “illegal immigrants” decide to flee the United States for points north.

Is that a preposterous notion? Hmmm. Not … entirely.