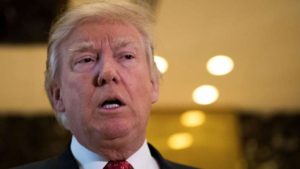 I am still rolling this one over in my noggin, but it might be that Donald “Smart Person” Trump has crafted a new definition of what we know as “fake news.”

During that rambling and ridiculous press conference Thursday, the president kept asserting that the Russia story is “fake news.”

As Shepard Smith of Fox News points out, it ain’t “fake,” Mr. President, and you need to provide some answers to Americans who are demanding to know the truth.

The Hill reported Smith’s response to Trump’s criticism of the media: “No sir,” Smith continued. “We are not fools for asking this question, and we demand to know the answer to this question. You owe this to the American people. Your supporters will support you either way. If your people were on the phone, what were they saying? We have a right to know, we absolutely do and that you call us fake news and put us down like children for asking these questions on behalf of the American people is inconsequential. The people deserve an answer to this question at very least.”

Smith, of course, is correct to challenge Trump’s constant berating of media for doing their job.

I’m now beginning to think that what Trump calls “fake news” really is news that is unimportant. It’s true, just not worth the media’s — or the president’s — time.

The whole “fake news” story burst on the public stage with bogus reports intended to do damage to political figures. Someone makes a story up, posts it on the Internet, the story goes viral and people respond the way the person who posts it intended. They make money on all the “clicks” they get on the bogus item. Some of these trolls get caught, are exposed for what they are — liars! — and then vow to quit doing it.

The Russia stories aren’t “fake” if you adhere to that original definition of “fake news.”

Trump’s former national security adviser, Michael Flynn, had conversations with Russian officials. The question pending is when he did that and at whose request or command. Moreover, when did Flynn lie to the vice president about it and did he violate the Logan Act, which bars unauthorized citizens from “negotiating” with foreign governments?

In other words, did Flynn tell the Russians that the new president would reduce or eliminate the sanctions leveled on them by the man who still was in power, President Barack H. Obama? Remember, too, that the sanctions came after CIA and other intelligence agencies determined that Russian hackers sought to influence the 2016 presidential election.

It isn’t “fake,” Mr. President. Reporters have every right — indeed an obligation — to ask you about all this.

It’s important in the extreme.

So, knock off the “fake news” description.