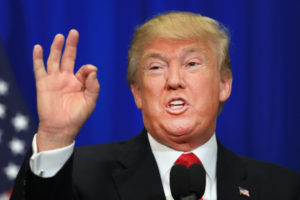 Yes, I am about to go nuts watching the evening news as it regards the 45th president of the United States.

He’s been in office for seven whole days and it seems like he’s been there … um, forever!

He signs an executive order starting to repeal the Affordable Care Act; he accuses millions of illegal immigrants of voting for Hillary Clinton, then announces a “major investigation” into the matter; he starts a trade war with Mexico over that country’s refusal to pay for the “beautiful wall” he wants to build; he continues to cozy up to Vladimir Putin; then several key State Department staffers quit, leaving him with some senior advisers in that key Cabinet agency.

He’s at war with the media. Chaos reins.

Honest to goodness, I can’t quite put my finger on which development startles me the most.

No Drama Obama sought to run the country in a more even-handed manner. Did it work? Well, yes. It did. The nation is better off than it was when Barack Obama took office. He turned it all over to “Smart Person” Trump.

My eternal optimism is being tested like hardly ever before. Why? Because the president of the United States — who took office without a single solitary moment of public service experience — is seeking to chart a new course through some unknown territory.

One thought on “You mean we have four whole years of this?”